Although we took a break from turkeys on our farm this year, fortunately our friends Jerry and Elizabeth Eaton didn’t, and they’d be glad to sell you one. If we can get enough orders together by the weekend they will deliver the birds to the farm on Wednesday, Nov26th at Noon. The birds will fresh, so no need to thaw. We need to get about 30 orders together for it to be worth their trip, so please help spread the word!

RESERVATION FORM IS AT THE BOTTOM OF THIS PAGE

About THE EATON FARM

Jerry and Elizabeth Eaton operate the multi-generational family farm, with plenty of help from Jerry’s mother, Sudie, and father, Jim.  Silas, Ira, and Abe the three young sons, are eager to help, too, and love playing in the dirt, just like Jerry.

Located near Madison, Indiana, the Eaton Farm lies on a topographical wonder called Scott’s Ridge. Consisting of several broad fields that taper off to narrow points above sloping wooded hollows, it is a special place that requires careful farming to prevent erosion. Crops are tended and cultivated in the main fields,

the gradual slopes are reserved for forages for the farm animals, and the steep hillsides mainly support woods. The 50 acre farm was purchased by Jerry’s grandparents, the Scotts. About a half mile up the road stands the old homeplace, where many generations were born and raised, and dates back to the early 1800’s. In addition to the main farm where most of the produce and stock are raised, the Eatons rent about 40 acres of hay ground.

Having lived on Scott’s Ridge his entire life, Jerry has been farming for as long as he can remember and can’t imagine doing anything else. Elizabeth, originally from Cincinnati, was not raised on a farm, but felt drawn to rural life after becoming interested in sustainable food systems. The couple first met at Berea College, where they both received degrees in Agriculture and Natural Resources. Jerry and Elizabeth have had the privilege to be full-time farmers together since 2008.

Here’s what they’ve got to say about their birds…

What could be better than a locally-raised turkey for your holiday table? We have been raising Broad Breasted Bronze turkeys since 2009. Named for its bronze-colored sheen, this old standby breed was originally a hybrid of eastern wild turkeys and the domestic turkeys brought to the United States by European colonists. It became quite popular in the turkey industry prior to the 1960’s, but was replaced by the faster growing white turkey and became a rarity. Bronze turkeys are now experiencing a renaissance among small farmers for their good disposition, ability to thrive on pasture, and superior quality. For more information on how we raise our turkeys, checkout our Growing Practices. 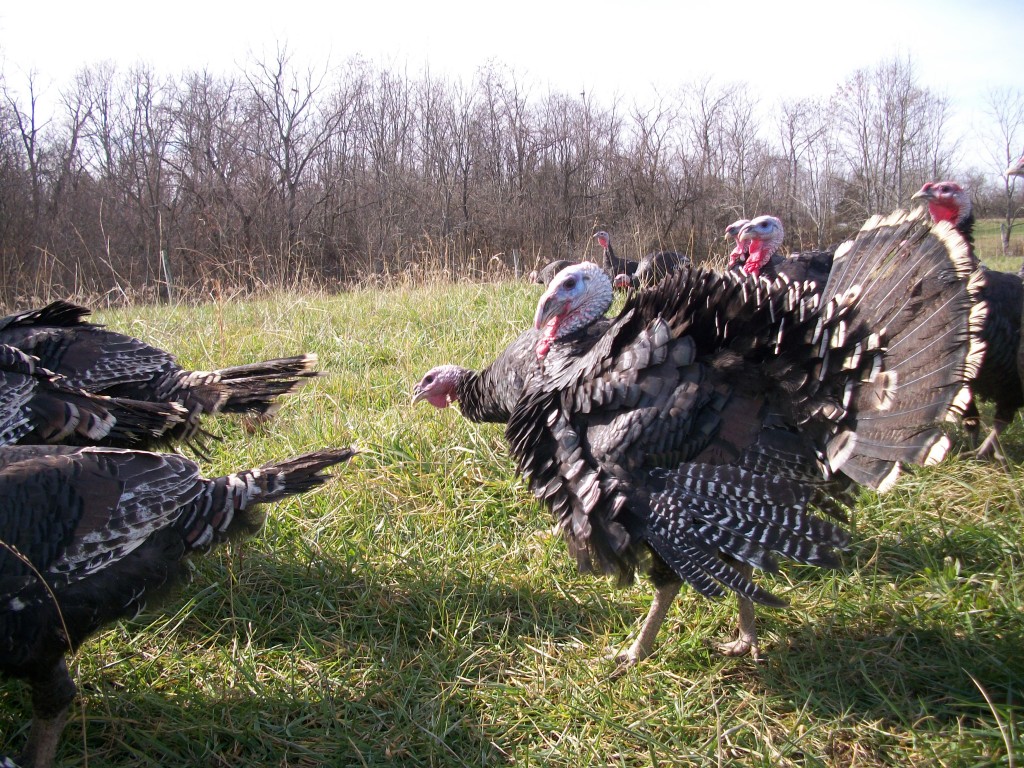 PLEASE SUBMIT YOUR ORDER BY SUNDAY TO MAKE SURE WE’VE GOT ENOUGH TURKEYS SOLD TO MAKE IT WORTH THEIR TRIP – Thanks!